We will send two types of questionnaire form after we receive your request and confirm the payment. One is to check your body type based on Ayurveda*1 and the other is to check your condition of five layers based on Vedic Philosophy*2.

*1. It is also called Ayurvedic medicine, is known as traditional medicine in India, that has been inherited for more than 5000 years. Ayur = life, Veda = science, knowledge.

*2. The Philosophy which originated in ancient India subcontinent and it included Ayurveda.

Please fill out the two forms and send them back to us by a week before the session. You may be asked to do this communication several times, according to circumstances.

On the day of session, firstly we take time for some questions, and then move on to yoga session. Yoga session will be 60-minute-long and after that you are informed some recommendations for your daily life.

We will be able to offer Ayurvedic Oil Treatment for 60 minutes. (Advance reservation is required)

Yoga session with our Representative Director at our salon in Yokosuka
16,500 yen(including tax)

*For a guest who has the session at our salon, pick-up service is available for Yokosuka-Chuo station. Her interest was people’s mind peace, so getting a Master’s degree in Psychology, she worked at a consulting company for Human Resource department whose solution is focused on the relationship and motivation of workers.

After delivering her ﬁrst daughter, she was amazingly healed from the unbalanced body & mind state by doing yoga asana deﬁnitely, so she decided to commit herself to becoming a full time yogini and yoga instructor.
Soon she started teaching at and gained trusts of one of most famous studios at Tokyo and was also in charge of jayachikitsa, healing program that needs even ayurvedic knowledge.

Further, she was led to start her own yoga salon at just front of the station of one of big and most sophisticated area in Tokyo. Then she taught so many student including celebrities, body trainers and so on.

After a few years later, she was pregnant with second daughter, and decided to move to more calm her hometown where is surrounded by mountain and sea and established the Yoga Therapist Association. She has been carrying out her own yoga instructor & therapist course and producing many talented yoga therapists in Japan.

She is also the director of the children support volunteer organization, whose parents are single, which serves dinner every Tuesday, Thursday and Saturday in her local area.

Her teaching includes anatomy aspects which can lead people fully safely and also real traditional vedic yoga and she can see the each person’s energy state. She first met yoga by joining Akiko’s yoga class when she was one of mom-friends of Akiko. Since then, she has enjoyed yoga so much as she has truly believed what teacher Akiko taught and kept practicing it sincerely.

She had learned psychology and childcare before she started yoga practice, because she had been very interested in people’s mind both adult and child since she was young, but one day, she realized that yoga was the one which made people happy and healthy and that was the her path.

Through her experience, she has deeply believed that yoga has an authentic power of self-healing and decided to engage herself in yoga, ancient sacred wisdom.

After that, she has completed RYT200 teacher training course and learned Ayurveda philosophy & Ayurvedic cooking etc. and then started to share her yoga.

Now, she is firmly continuing her journey to herself and always feels and appreciates the sacred gift receiving from Yoga, Yoga sutra of Patanjali and Ayurveda.

A series of the Foundation of Soul

It is amazing that people called professionals in some field doing yoga with me, often say that “what you tell and what you do in your yoga class is completely the same when I do my work! “

Relax and let your breathing longer, move your body while gazing and feeling your inside.

The state of deep meditation in any field or world will ultimately bring out the best expressions.

What does the combination of yoga, meditation and writing show us? Please enjoy what happens and how the expression comes up!

The series starts with Japanese Calligraphy! 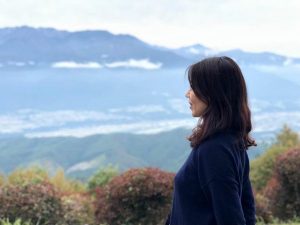 It has been 45 years since she started writing at the age of 3.

After graduation from university, she worked at the Matsuoka Seigow Office, and then worked as a teacher at several kindergarten to high school and has attracted a lot of students.

Her calligraphy class is reputed as “the healing time through writing, focusing on what to write”.